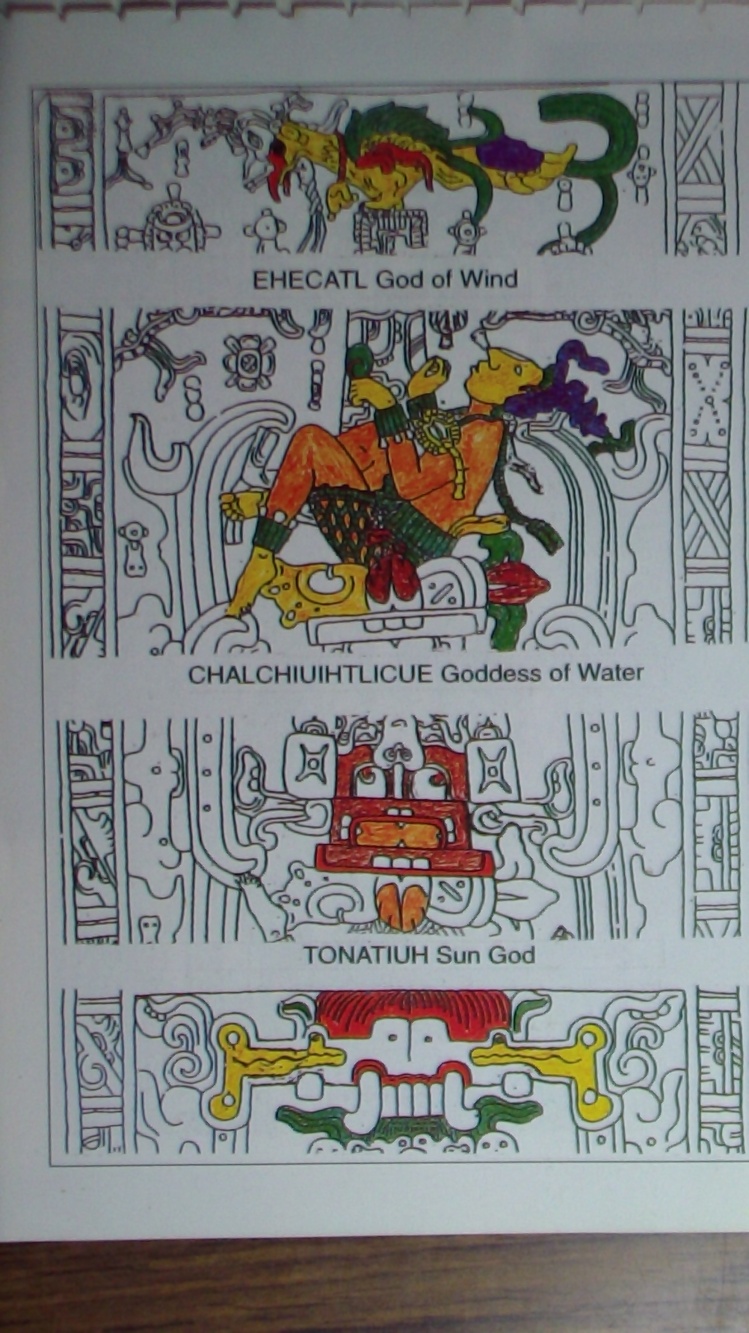 It was six months since Claremarie and Rick had visited the City of the Sun.

Maria had been busy decoding various inscriptions on the tablets found in the tomb and I was, with the assistance of the Old Priest, working on the lid of Lord Pascal’s sarcophagus. It is amazing, how much history we have unveiled from the lid so far.

The Old Priest said this was a sacred document in the Mayan mythology, a missed link, for his people, lost in the evolutions of many centuries of history.

It represented the creation of the world, as narrated in their mythology, where in successive eras the gods were alternating as masters of creations, in the hope of constructing a better world. A perennial rivalry was formed in which, the previous establishment was destroyed.

The gods are represented as opposed forces of nature, neutralizing the powers settle from the previous god, and the new ruler, taking over from the old, and introducing opposing forces ruling over the previous creation. All this was part of their mythology. The duration of the cycles were fixed times, calculated by following rules imposed in their sacred calendars.

To reach this conclusion of similarities between the sarcophagus lid and the Mayan mythology was an hard exhausting work over many months. The Old Priest and I reached some conclusions in that time, but we were still missing other vital links. I was hoping that with the seer of the Old Priest, we would able to reach the final solutions of all the riddles. The priest used to meditate and to pray his gods, then when he was ready to communicate with them, fell into a trance. While he was in this heightened mood, he spoke back using different tonalities in his voice. Most likely, he borrowed the voices of the spirits or the gods that he resurrected from the past to answer his questions. It was a long and slow process, I have to admit, but it gave results.

During the first sun, or the first period of creation, the people who lived on earth were giants and ate maize. At the end of the cycle, this first sun was destroyed by the floods and men were turned into fish.

The goddess who presided over this era was the goddess of water, Chalchiuhtlicue, meaning the one who wears the jade skirts. The Old Priest could recognize the goddess on the lid and that was the starting point of our discoveries. The goddess was the central figure carved on the lid, the one that we firstly mistook to be an astronaut.

The goddess represented on the lid also wore a jade necklace and water flowed from her feet, as mentioned by the mythology. She represent the first era of the Mayan creation.

During the second sun, the second era of creation, people ate Acotzintli, a wild fruit supplied by the god of this era, till this sun was destroyed by Ehecatl, the God of Winds.  The God of Winds is important in the Mayan mythology and is credited to be the first god in their religion.

This god was usually represented as a bird with a long tail, called Quezal, a rare bird with green feathers and highly praised by the Mayans. Quezal is recognized also in their mythology as the feathered serpent, a main figure in the hierarchy of gods and much praised by the Mayan. On the lid, the bird is clearly visible, and stayed above the central figure.

The next two gods mentioned in the mythology of the creation of the world, were more difficult to find but, when looking to the lid from the reverse angle they became recognizable. The first to appear was Chaac, the rain god, represented with six long tusk or rivers and below him was Tonatiiuh.

This last god is show with his tongue poking out symbolizing that he was creating life. Humans who lived in this era couldn’t survive the starvation caused by a rain of blood and fire.

Our discoveries from the lid stopped at this point for sometimes. In our exploration so far we could only identify the main figures in the Mayan book of creation.

We knew that the Mayan mythology had many more key figures in the representation of the world’s beginnings, but we couldn’t recognize them in the riddle of the lid, and hidden somewhere from us.

It took another three months to find more answers, three months of agonizing torment for me, racking my brains in search of plausible conclusions, and long meditations, trances and prayers from my assistant, the Old Priest. “We are missing the connecting point”, the Old Priest continually repeated in his trances, “We have to find the Popul vuh, which has been handed from our legend down to humanity, and which had been lost.”

There was any possible connection between the Popul vuh (Council book) and the lid of Lord Pascal sarcophagus? The lid had been entombed for centuries and so it had been hidden from the people’s eyes, and so lost to them.

Was it possible that the missing Popul vuh was the lid itself? The one lost in the mysteries of the past? This possibility excited me and I asked the Priest,

“My old friend, do you think is it possible that the lid itself is also the Popul vuh?”

“I will ask the gods for an answer, I’ll make offers and I’ll pray till the gods answer me.”

And so he did. After a long week of meditation he spoke to me while he was in trance,

“Look for the sign of the Sun on the lid. The Sun will reveal all the rest of the prophecies which are still hidden.”

We couldn’t find any clear evidence though we knew it should be there.

How exactly is this sign represented? I asked the Old Priest,

“How do you symbolize the Sun in your mythology?”

‘The more simple representation of the sun is a cross.”

It’s true, many of the primitive religions used to represent the sun with a simple cross, but the lid didn’t have any evident cross, or so we thought. It finally became obvious when we reversed and overlapped the border designs of the lid. We could then clearly see the form of the missing cross, the proof we needed and which provided the key to decode the rest of our enigma, the missing part of all the puzzles. We were amazed to find so many other details in front of us, and it all made sense. What before were chaotic images, when joined with the missed second half of the opposite border, became clear designs. We were now confronted with the symbolic designs of the Mayan mythology.

The most evident was a dragon, symbolizing fertility. We also found the face of one jaguar, one monkey was visible with his arms outstretched over his head, and there was also a stylized snake head, and the figures of two bats flying in opposite directions. All of them completed their myths as it was narrated in the book of creations, so we could conclude that the lid could possibly be the Mayan Popul vuh.

Out of all those images, the most important was the figure of the Jaguar, which is the representation of the fifth age of creation, the one which, in their mythology, is the one existing now in our present days.

Astutely the artist had disguised part of the figures of the book of creation because he had only clearly represented the first four cycles of creation, mentioned in the Mayan legends. The creator of the lid cleverly had hidden, from the prying eyes of the casual onlooker, the complete view, distorting in this way the meaning, to anyone who wasn’t profoundly aware of the complete mythological story of creation.

Naturally, I owe most of the merits in those discoveries to the help of the Old Priest, who had interpreted for me the majority of the mysteries of their past civilizations.

Italian born, and living in Australia. I'm writing for the past 15 years in both Italian and English language. I pubblished my first book in USA and it's available with Amazon. I also wrote several long stories which are grouped under the name "A song of Love" and several other works available in my blog in Rosso Venexiano. View more posts